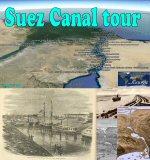 The Suez Canal is a large artificial canal in Egypt, west of the Sinai Peninsula. It was originally 164 km (102 miles) long, 300 m (984 ft) wide at its narrowest point and 8 m (26 ft) deep. After multiple enlargements over time, the canal is 193 km (120 mi) long and 24 m (79 ft) deep. The canal connects Port Said (Būr Sa’īd) at Lake Manzala in the north at the Mediterranean Sea, with Suez (al-Suways) in the south at the Red Sea, through Lake Timsah (Crocodile Lake) and the Great and Small Bitter Lakes.

The Suez Canal allows water transportation, most importantly between Europe and Asia without circumnavigation south of Africa. Before its opening in 1869, goods were sometimes offloaded from ships and carried over land between the Mediterranean and the Red Sea. The canal allow only one single primary lane and therefore only one direction transport at any time on major parts of the canal for the very big ships passing through. This is coordinated and relieved by 3 major canal ‘by-pass’ areas and natural lakes along the canal making it possible for ships to pass eachother in opposite directions.

The Ismailia Canal or Freshwater Canal starting at the Nile north of Cairo, was constructed in 1858-1963 to supply the villages and cities along the Suez Canal with drinking water. Enlarged in 1876. Believed to a large extent to be a modern replacement of an ancient canal which ran east from the Nile and watered the Biblical land of Goshen with its various branches and flowed into the Bitter Lakes. The present Canal goes from Cairo and flows into the Suez Canal and Lake Timsah at Ismailia. Two main branches of the canal originates just west of Ismailia; the Abbasah Canal – “Said arm” of Ismailia Canal which extends north to Port Said and the Suways al Hulwah Canal – “Suez arm” of Ismailia Canal which extends south to Suez.

About the “Suez canal tour”: Welcome to the Suez canal tour. Take a tour over this artificial canal from the Gulf Suez, the Red Sea and the Indian ocean in the south, to Port Said in the north by the Mediterranean Sea. Also included are “Suez Ships Spotted” in current and historic imagery of the Suez Canal. Tour creator: Tom Kjeldsen, created december 2007. Recommended to be viewed as a ‘Play tour’ in Google Earth with terrain feature enabled.