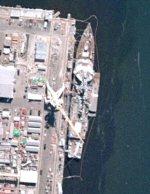 USS Kidd (DDG-100) is an Arleigh Burke-class destroyer in the United States Navy. She is the third Navy ship named after Rear Admiral Isaac C. Kidd, who was on board Arizona during the attack on Pearl Harbor, and was the first American flag officer to die in World War II.

The ship was damaged at the shipyard docks during Hurricane Katrina on the Mississippi Gulf Coast, requiring a return to the dry dock for repairs, delaying her commissioning and deployment with the Navy. She was commissioned in Galveston, Texas on June 9, 2007. She is currently homeported in San Diego, California.