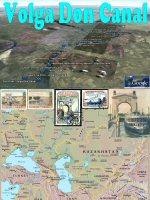 The Volga-Don Canal (Russian: Волго-Донской канал) connects the Volga River and the Don River. A canal said to be “connecting Asia with Europe”, joining of the five seas: the Baltic Sea, the Black Sea, the White Sea, the Sea of Azov and the Caspian Sea. Take this tour from Volgograd, former Stalingrad on the Volga river to the canal estuary into the Don river. The length of the waterway is 101 kilometers (63 miles) of which the 56 km (35 mi) is digged canals and the remaining 45 km (28 mi) is through rivers and reservoirs. The canal has 13 locks and rises 88 meter and then fall 44 meters along the total length of the canal. That way, the Don River raises 44 meters above the Volga River through their connection. To ensure adequate quantities and levels of water in the canal, there are 3 pumping stations (Karpovsky, Marinovsky, Varvarovskoy) that pumps water back to the canal from the Tsimlyanskoye vodokhranilishche (reservoir) south-west of the canal estuary into the Don River..

In 1569 the Turkish Sultan Selim II sent 22,000 troops up the Don to dig a canal between the two rivers. However, only a month later, the Turks retreated giving up the project.
In 1697, Peter the Great decided to build the canal between the tributaries of the Volga and Don rivers, Reed and Ilovlya, but, because of a lack of resources and other problems, this was abandoned in 1701.
In 1701, a second construction attempt was initiated, far north of the current canal, known as the Ivanovsky Canal. This canal was actually opened with 24 locks. 300 ships managed, under remarkably difficult navigation conditions, in 1707 to pass the canal.
For more than 200 years, from 1709 to early 1930’es, mainly financial and changing political difficulties stopped the construction of the original canal and maintenance of the Ivanovsky canal. The current canal construction project was established in the mid-1930’es, but paused because of World War 2 / the Great Patriotic War. The Volga-Don Canal construction was resumed in February 1948 and completed only 4.5 years later where navigation was opened June 1, 1952.

About the “Volga-Don-Canal” tour: Take a tour along the waterway which consist of several locks and reservoirs to cross to make the trip between the two main transportation rivers in mid Asia/Europe. Tour creator: Tom Kjeldsen, created august 2010. Recommended to be viewed as a ‘Play tour’ in Google Earth with terrain feature enabled.